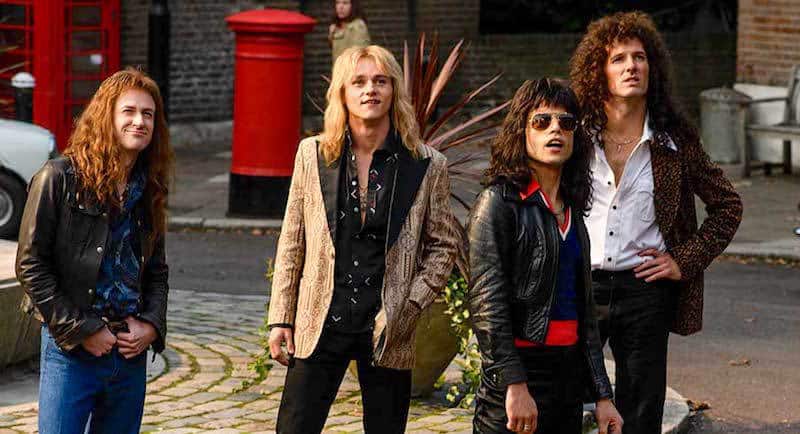 Locations across London’s inner and outer boroughs were called on for Bohemian Rhapsody, a biopic about one of the capital’s favourite sons, Freddie Mercury. Some doubled as Mercury’s renowned London haunts and others as New York or Amsterdam. Many of them can be glimpsed already in the trailer. The film opens in the UK on October 24th.

FilmFixer manages the film office service for many of the London councils that helped out with locations in Bromley, Haringey, Lewisham, Southwark, Kingston, Hounslow, and on the Union Canal in Rickmansworth.

FilmFixer CEO Karen Everett says, “As expected, many of the residents the production came across were big fans of the band, and happy that the film was being made in their neighbourhood.

“The production itself did a great job at getting to know residents and making donations to local residents’ groups to thank them.

“In Bromley, the cast and crew had their photo taken with local fire fighters at Norman Park, during filming in October last year.

“Bromley’s Old Town Hall was put to work as Ealing Art College, which Freddie Mercury attended, and where the band gigged. It looks great in the trailer. It also plays the surgery of Freddie Mercury’s doctor.

“Union Street in Southwark doubled as New York. In the trailer you can see Freddie Mercury has thrown his manager out of the limo there.

“In Redcross Way in Southwark, the shoe shop Cobbler’s Nest was turned into a record shop in Amerstam – where Freddie Mercury learns his solo album isn’t doing well.

“A home on Malyons Road in Ladywell, Lewisham, which you can also see in the trailer, plays the Feltham home in West London that Freddie grew up in, in the 70s. The production made a donation to local charity For Jimmy.

“A private location on Ashcombe Avenue in Surbiton, Kingston plays the famous Kensington home of Freddie Mercury, Garden Lodge, which he left to Mary Austin. Lots of engagement with residents was important here, as filming took place over seven days, with up 100 extras for some of the party scenes.

“Hornsey Old Town Hall in Haringey saw a lot of scenes. One of our favourites, which you can see in the trailer, is where Mike Myers as Ray Foster at EMI records says, ‘Mark these words: No one will play Queen,’ and ‘It goes on forever, six bloody minutes.’ To which Rami Malek as Mercury says, ‘I pity your wife if you think six minutes is forever.’

“You see the band leaving Foster’s office unhappily, in the forecourt of the Old Town Hall, by the fountain, looking up at Mike Myers’ window.

“In another scene there, manager Jim Beach played by Tom Hollander, is saying, ‘Fortune favours the bold.’

“And there’s another where Freddie visits Mary Austin, who became his girlfriend, at Biba clothing boutique.

“The production worked really well with local residents in Hatherley Gardens, as well as showing just how versatile Hornsey’s Old Town Hall can be.

“In Hounslow, there’s a crowd of 100 inside The Griffin pub on Brook Road South, crammed in to watch the Live Aid broadcast on TV in the 1980s.

“And Mafeking Avenue on Brentford is empty, except that through the open windows of the homes, the sound of Live Aid can be heard blaring out.

“In Rickmansworth, a lovely sunset scene was filmed at Stockers Lock on the towpath along the Grand Union Canal. We organised this permitting on behalf of our client the Canal River Trust.”

Southborough Residents Association in Kingston, McMillan Cancer Trust, street party organisers for Hounslow residents, Friends of Norman Park and Norman Park Athletics Track in Bromley, and Bankside Residents Forum in Southwark all also received community donations, as a thank you from the filmmaker.

Freddie Mercury’s parents were Parsis, Indians of Persian extraction, who followed Zoroastrianism. They arrived in London after fleeing the revolution in Zanzibar in 1964.